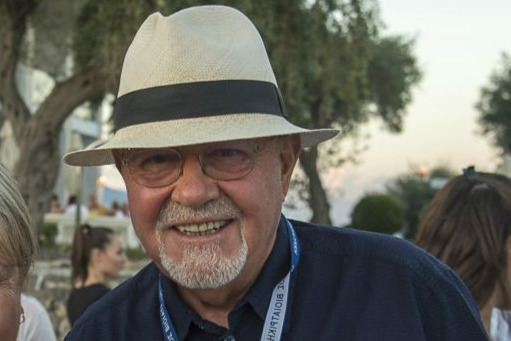 Evangelos Spanos was one of the fathers of the Athena Society as well as its soul. He was present at the dinner in 1992 in Chicago which solidified the concept of an Athena Society (along with Basil Doumas, Jack Ladenson, Leonard Jarett, Carl Burtis and their spouses). As noted elsewhere, the first meeting was in Rhodes Greece in 1994. Evangelos was there as he was for all the meetings until his death from complications of COVID-19.

Evangelos, the son of a farmer in Sindos, Thessaloniki, received a medical degree from the University of Thessaloniki in 1969. Later, although speaking hardly any English, he went to England with his wife Mahi, who did speak some English, seeking postdoctoral training. He received such training in laboratory Endocrinology and his Ph.D. in the Laboratory of Iain MacIntyre at the University of London (Iain attended the Athena Society meeting in Spetses in 2000).

In 1981, Mahi and Evangelos returned to Greece and started a small endocrinology laboratory on Michalakopoulou street in Athens with the help of a small loan from Dr MacIntyre. In 1986, Evangelos created the first multidiscipline diagnostic center in Greece, published the book, “Laboratory Diagnosis”, followed by the book Clinical Chemistry in 2006. In 2013 he received the “self-made entrepreneur” award from Ernst & Young.

From its founding as a single laboratory, the BIOMEDICINE GROUP (Bioiatriki) has grown to include over 50 diagnostic centers in Greece and additional ones in Cyprus and various clinics. It employs over 2,000 people.

At the first meeting in Rhodes in 1994, Evangelos arranged medical care for one of the Athenians who had a serious medical problem, took him to Athens, and made sure he had the best care.

From that meeting on, Evangelos was the host of the Athena Society meetings and truly showed the soul of Greece to all. His enthusiasm was infectious, both for laboratory medicine and Greece, in the scientific sessions and cultural activities. No one who was there can ever forget him leading the dances at the meeting in Mykonos followed by breaking plates on the floor, which he described as an old cultural tradition.

After his death, his son, George, said his father enjoyed every meeting and the company of all the attendees and guests. As we did you, old friend.

Notes of Sympathy in Remembrance of Evangelos Spanos

"Special" fish caught and cooked by Dr. Spanos and served at lunch, Jack and Dr. Spanos dancing and breaking plates, the endearing smile and pride during scientific sessions - these along with his tremendous generosity to the Society are what I will remember forever and that will always put a smile on my face! What an amazing life he led! - Mitch & Barb Scott

Dear Mahi, George and the rest of the Spanos family, I am so sorry to hear about your loss; we have really lost a remarkable man and a dear friend. Although Jack Ladenson, Basil Dumas and Dr. Spanos are the fathers of the Athena group, there would not have been a group without him. His generosity and sense of pride about both the profession and Greece are the drivers behind the continued existence of this group. I have been attending these meetings since the one in Spetsus and have grown to look forward to the next one to enjoy the company of friends and to learn from them. I will always remember his gentleness and welcoming demeanor; I am also grateful that our paths have crossed in this life and got the opportunity to know him. With my sincere condolences -Nader Rifai

I was very sorry to learn of the death of Dr. Spanos. Like all members of the Athena Society, I was privileged to meet Evangelos on numerous occasions in many locations in Greece, to enjoy his wonderful and generous hospitality, to appreciate his great sense of humor and watch his exuberance and joy as he demonstrated how to dance like a true Greek. Audrey and I wish his wife and entire family our sincere condolences and hopes that the many expressions of respect and friendship, that they will undoubtedly receive, will bring some joy for them. - Peter Wilding

Evangelos, you will be missed greatly, you introduced me to your generosity and warmth. Mahi, my deepest condolences for your loss.-  Eugene Chan

I'm so very sorry for your loss. Dr. Spanos' generosity and warm heart was a great gift to us all. - David Grenache

Thank you for all the amazing memories, active participation, and generosity. - Susan Evans